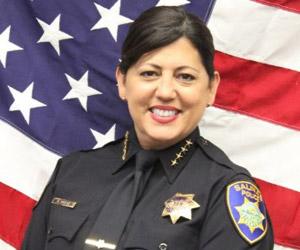 Chief Adele H. Fresé joined the Salinas Police Department in 2016 after more than 20 years with other law enforcement agencies. She began her career of public service in the United States Marine Corps, serving from 1985 until 1992. In 1994 she joined City of Corpus Christi Police Department as a Patrol Officer and was promoted to Senior Office in 1997. As a Senior Police Officer/Sergeant, she trained fellow officers, operated undercover, and successfully implemented the first Crime Stoppers program in all 5 Corpus Christi school districts, where she garnered support by collaborating with school superintendents, principals, staff and media to create what became an award winning program, still in operation. In 2002 she earned the rank of Lieutenant, serving first as a Night Patrol Lieutenant, managing 10 to 20 Officers, handling Police complaints, and fostering strict DWI enforcement, and later as Special Operations Lieutenant, working with her community to develop strategies to combat and respond to crime, improve quality of life, and to reduce crime and fear of crime.

Chief Fresé holds a Master of Science in Public Safety Degree, as well as a Bachelor of Science in Criminal Justice Degree and numerous additional certificates. She is currently the Chairperson and Advisor for Learning for Life, a member of the International Association of Chiefs of Police, the California Police Chiefs Association and the Monterey County Chiefs Law Enforcement Officer Association (MCCLEOA), and a former Executive Board Member (past) of Boys & Girls Club of Corpus Christi.